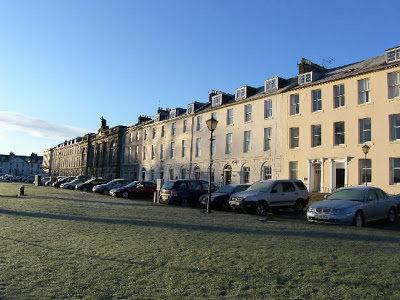 Georgian Perth New Town
In the late 18th century the area between the medieval burgh of Perth and the North Inch was planned as a New Town, comprising Charlotte Street, Atholl Crescent and Place and Rose Terrace. The frontage of Rose Terrace was designed by celebrated architect Robert Reid is very impressive. The central building, the Seminaries incorporated Perth Academy and the Grammar School, alongside a number of smaller schools. With views across the Inch, Rose terrace is considered to be one of the finest examples of Georgian architecture outside of Edinburgh. In 1798 a second New Town was laid out between Canal Street and the South Inch, which involved filling in the Medieval ditch. The main feature of the development was Marshall Place, with its elegant Georgian townhouses commanding fine views of the South Inch. In 1801 St Johns Street was created as an extension of the route from George Street to South Street.


Text thanks to www.pkht.org.uk
Posted by Ewart Corrigan at 13:11