The Gowrie Conspiracy Perth in History 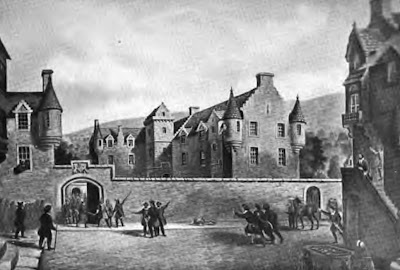 An alleged assassination attempt was made by Alexander Ruthven, the Earl of Gowrie and his brither John on King James V1 at Gowrie House Perth in 1600. The account of events tells that the Ruthvens tempted tempted the Kind to Gowrie House under false pretenses in an attempt to kidnap or murder him. The plan was to use the King as a hostage. The conspiracy failed as the King was able to alert his attendants with the reult that the Earl and his brother were both killed in the struggle. Whether this was a genuine assasination attempt or a cunning plan by the King to remove a disloyal friend remains a mystery.
The King survived and in 1603 suceeded Elizabeth 1 as James 1 of England thus uniting Scottish and English Royal houses.

Gowrie House in which the Gowrie conspiracy took place was demolished  just over 200 year ago in 1807. The site is now partly occupied by the Northern portion of the Perth Prison and a part of the County Buildings. Remains of it can still be seen along the south side of the Water Vennel.