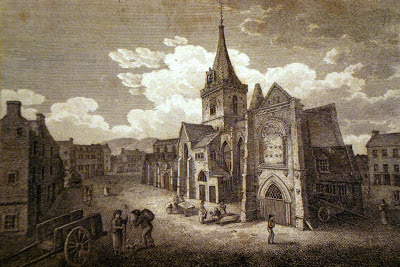 Medieval Perth in History
The First Medieval settlement is likely to have started in Perth towards the end of the 10th century building along the West side of the Tay which became the Watergate. This would have been along the route to the crossing of the river, now called the High Street. The development grew around St Johns Kirk, the centre of the early town and gave Perth its other name of St Johns Toun.
King David 1st made Perth a Royal Burgh in the 12th century. The location on the River Tay and being in the heart of the fertile valleys of Strathearn and Strathmore led to a boom in growth and trading of goods. Perth traded with France, Spain and the Low Countries and the Baltic Regions. These goods entered and left Perth through the harbour which was originally located adjacent to the centre of the town.
Perth was at that time controlled by a Burgh Council made up of a Provost and Baillies, which oversaw the markets and collected taxes for the King. 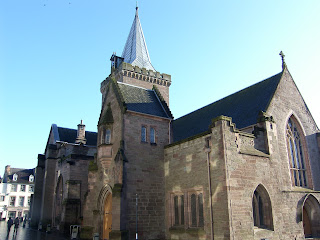 In the year 1210 the Merchant Guild was established by King William the Lion to regulate trade within the area. of the buildings from the medieval burgh, only St Johns Kirk survives, although it had undergone many changes. The early burgh can still be traced in the central street pal. Perth was one of the few walled towns in Scotland. Signs of this wall can still be seen in Canal street, Methven Street and Mill Street which mark out the boundries of the early burgh wall and ditch. Street names such as North Port, from the French word,  Port meaning entrance,  and Culog Vennel, vennel from the French meaning small street,  reflect the past and international links abroad with Perth. Other names such as Skinnergate and Fleshers Vennel reflect the activities carried on there of animal skinners and butchers.
Due to its central location and wealth as a leading Royal Burgh, Perth was the site of a series of parliaments during the later medieval period. The town was also occupied by both Scottish and English forces during the wars of Independence of the late 13th to 14th centuries. The occupation resulted in Perth being one of the few Scottish towns to have a defensive wall of stone built around it.

Thanks to www.pkht.org.uk and PKC archives

Next blog post about the History of Perth the Battle of the Clans 1396
Posted by Ewart Corrigan at 10:19