Old Photograph Salutation Hotel and a brief History
One of the oldest hotels in Scotland, the Salutation Hotel Perth, now owned by Strathmore Hotels Group, has been welcoming guests since 1699. It was originally a private house, to the Murray family family or Viscount Stormont of Scone. From 1699 it served as a coaching Inn until 1745. From that point it is believed to have been run by the Franciscan Order of Grey Friars.
In 1745 Prince Charles Edward Stuart on his march to invade England stayed at the hotel room 20 and met with his commanders to discuss their rebellion plans against the English.
The Hotel remained an important stoppong off point between Aberdeen and Glagow or Edinburgh for travellers. The side of the Hotel was the stopping point for horses and coaches.
The large Victorian arch facade  main entrance was designed by Robert Reid  and was connstructed in 1800 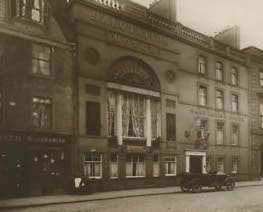 The Hotel as it looks today 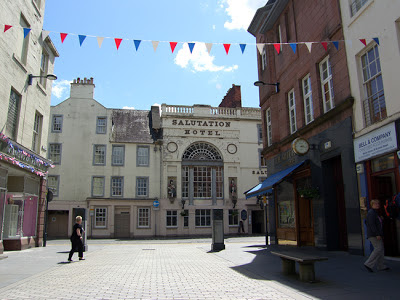 Find the location of the Salutation Hotel, South Street,  in Perth by Google street view. use the circle to navigate up and down the street.