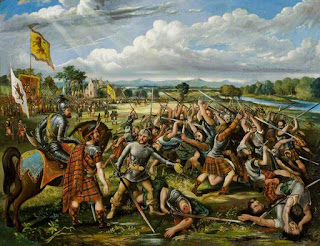 The Battle of the Clans  sometimes called the Battle of the North Inch Perth was faught in Perth in 1396. The battle was the result of a long dispute between the Chattan or MacKintosh clans and the Mackay Clans. When no agreement could be reached it was decided to settle the dispute with a battle.
On a Monday morning in late September 1396, the clans marched through the streets of Perth, armed with bows and arrows, swords, targes, knives and axes.  Barriers were erected on three sides of the Inch, in an attempt to keep spectators off the battlefield, with the Tay forming the natural fourth side to the north. The summerhouse of the Dominican Friary, which afforded those inside an excellent view of the Inch, was adapted into a grandstand for the King and his entourage. 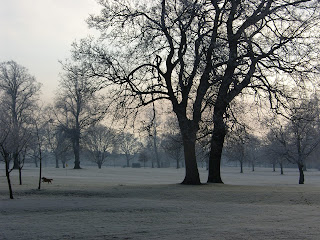 Under the watch of King Richard 111 each side provided 30 men who faught to the death. The King signalled the end to the dispute with the Chattans the victorious. Only one member of the Mackay clan is said to have survived having escaped by swimming to safety across the River Tay.

Next, read about Perth and the Reformation

Thanks to PKC Archives Dept and www.pkht.org.uk
Posted by Ewart Corrigan at 15:07